Little by little, the growth in the number of zero clicks in Google searches has been raising an alert among digital marketing professionals, since the end of organic traffic is feared.

Semrush, in his study entitled «Zero clicks» of 2022, exposes that organic clicks are still in the lead with a result of 45.1% on desktop computers and a 43.1% on mobile phones. So why is there a fear of a decline in organic traffic?

What are Zero Click Search or searches without clicking

The term Zero Click Search, also known as no-click searches, refers to those searches that end without a click on any of the web pages suggested as a result in Google.

Google has adopted a dynamic in which when you perform a search you already show the answer without clicking on one of the pages that returned as a result. This fact has caused an alert among companies and experts in SEO positioning since they want to prevent their work from being in vain.

Therefore, Semrush decided to analyze the behavior of 20,000 unique users spread evenly between desktop and mobile. To do this, they extracted the search requests made in Google and the clicks made after the searches.

One of the factors that are exposed in the study and are usually counted as “no clicks” are the actions towards the Images, News or any of the other sections offered by the search engine. Faced with events like this, during the study a breakdown was made of the actions at the time of searches that users make to understand where the “no clicks” moments come from.

Patterns of actions in Google searches

Semrush broke down the data for organic, paid, and null clicks into different groups. In this way, five main patterns of actions that users take when doing a Google search were born:

Organic Clicks: are the general clicks to any external website outside of the search results, leaving out the ads.
Paid Clicks: the clicks made on the ads that are shown in the results.
Google Clicks: This is when an action occurs that changes the URL but keeps the user on Google. An example of this is when they decide to go to the Images or News section of the search engine itself.
Change of keyword: when searching on Google but with a different keyword. This could be a situation where a user couldn’t find the answer and decided to try a different search.
Other zero clicks: any other case where a zero click has been registered in a time of two minutes.

Taking into account the breakdown of the patterns of actions in Google searches, it was determined that the 45.1% of clicks happen organicallywhile there is only 25.6% zero clicks.

In turn, it was concluded that 17.9% of clicks occur after changing the keyword, 9.7% are Google clicks and 1.8% are paid clicks. 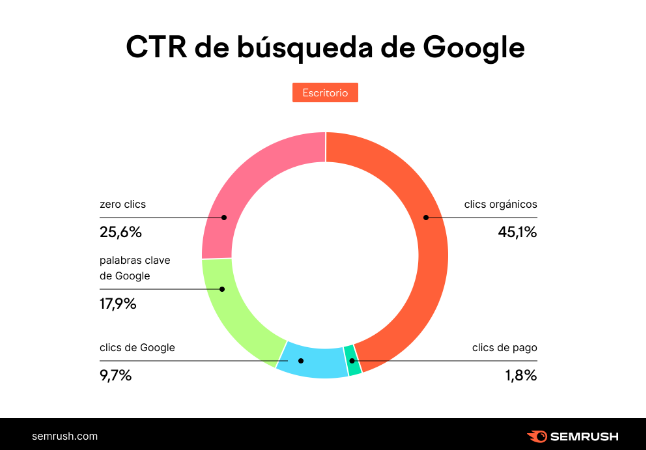 In the case of mobile devices, there is a clear difference in the numbers of the action patterns, starting with paid clicks that sit at 0.02, which is quite low compared to desktop computers.

The number of zero clicks also decreased significantly (17.3%). According to the study, this may be because users find features that directly present their search responses less attractive and scroll past the top more easily.

On the other hand, Google keyword change increased to 29.3%, while Google clicks remained at 10.3% and organic clicks at 43.1%. 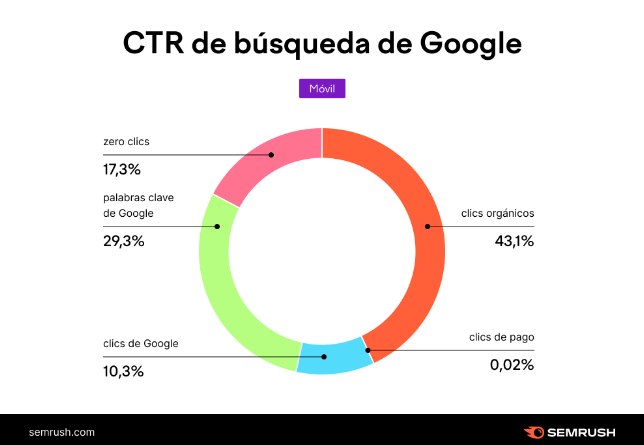