Home » Centennials Vs millennials Vs generation X: this is how we use social networks in Spain according to our age
Ecommerce

Centennials Vs millennials Vs generation X: this is how we use social networks in Spain according to our age

SmartMe Analyticsa real-time market data collection platform, has presented the report entitled All about the consumption of Social Networks, in which it analyzes the use made by the different generations (GenZ, Millennials and GenX) of the 6 main networks social market, YouTube, Facebook, Instagram, TikTok, Twitter and Twitch.

TikTok skyrockets its penetration among those over 45

The data has been collected during the period of January and October 2022 and the same period of 2021, thanks to the real-time monitoring of a sample of 12,476 users representative of the Spanish digital population.

As reported by the technology company in a press release, Twitter and Twitch are the digital platforms with the greatest increase in their user share in the last year, with a growth of 48% and 36% respectively. The growth of generation Z on these platforms is especially notable: 77% more on Twitch and 60% more on Twitter. Similarly, the increase in the 71% of the share of users over the age of 45 using TikTok“consolidating the entry of this app as one of the four main ones in the market”.

The growth of Twitter takes place after the numerous controversies that the social network has gone through since it was bought by the billionaire Elon Musk and the wave of layoffs. Looking back over the past three weeks, when the company has experienced many tense moments, it’s notable that Twitter has managed to hold steady around 27% of your user share and even have a slight increase in its quota of approximately 1%.

Instagram is used by the 95.5% of young people between 18 and 24 years old, therefore it is considered the main application of GenZ. The second and third places in this top 3 are for YouTube, with a 94% user share, and TikTok, with 81%. For his part, Twitch has had an increase of 76.92% Compared to the same period in 2021, it is the fastest growing social network among this generation. 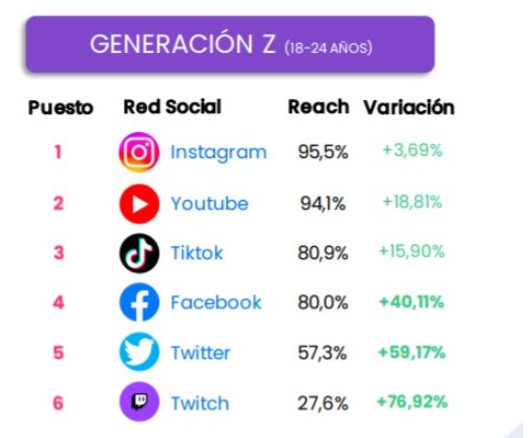 For these users, the afternoon, more specifically between 2:00 p.m. and 5:00 p.m. It’s the favorite time to use social media apps. Its use is greater on Wednesdays, especially during the first 10 days of the month.

Aliexpress and Shein, leading ecommerce apps among the youngest

Generation Z also coincides in the use of different brands, among which entertainment stands out, thanks to Spotify (66% user share) and Netflix (49.5% share). In the retail sector, the most used platforms are AliExpress (56% share) and Shein (54% share). The presence of second-hand apps stands out, such as the case of Wallapop, with a 51% user share and fourth place in the top 5 of the main applications. 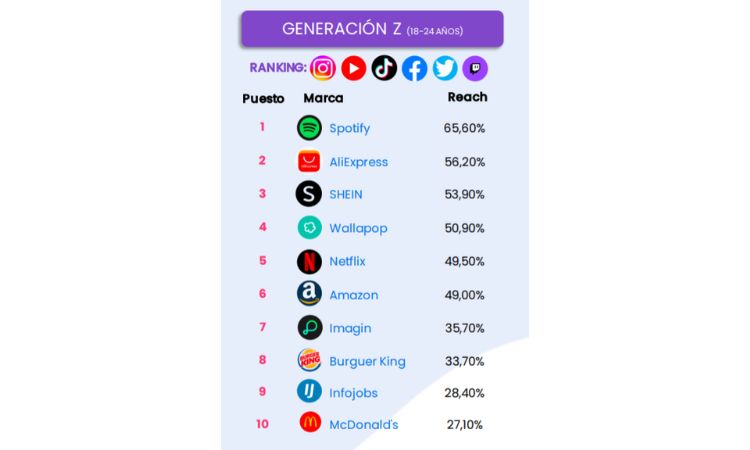 Millennials, from the youngest to the oldest

In both groups, the top 3 preferred social networking apps are led by YouTube, Facebook and Instagram, that depending on their age the figures vary slightly. For example, in the case of Instagram, Old Millennials reduce their use to 84% compared to 90% of the Young.

The real change comes in the fifth position of the ranking, because while young people choose Shein (45% share)older people prefer LidL Plus (49.5% share). 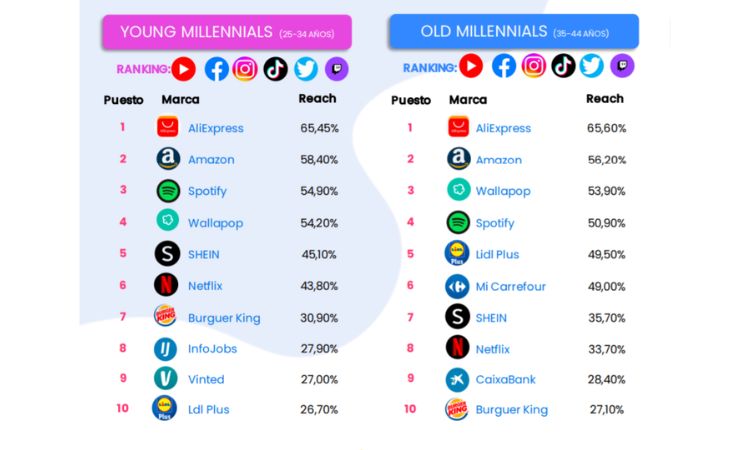 Those over 45 are increasingly entering social networks 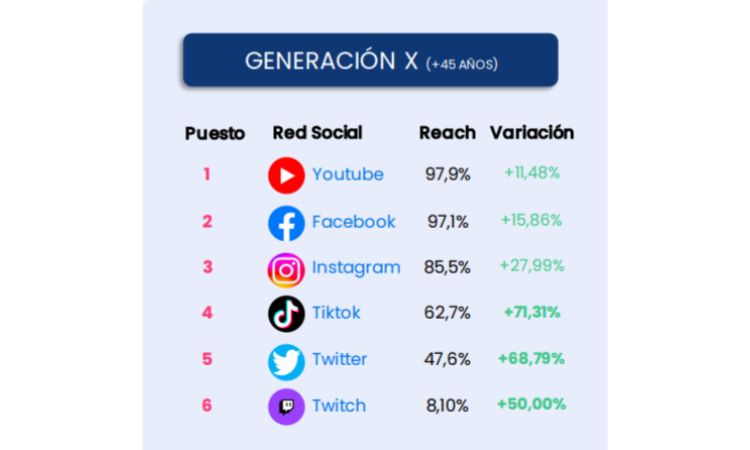 The members of generation X prefer to wait until the end of their working day to use social networks, being their favorite time between 7:00 p.m. and 10:00 p.m. The use usually intensifies the first 5 days of the month and at the beginning of the week, on Mondays.

Regarding the brands most used by generation X, the top 5 is led by Amazon (66% share of users), followed by AliExpress (61% share) and Wallapop (52% share). Banking applications fall within this generational range, with third place for CaixaBank (42% share). For entertainment, Generation X is limited to Spotify (43% share), which is fifth in the main ranking, and Netflix (37% share). 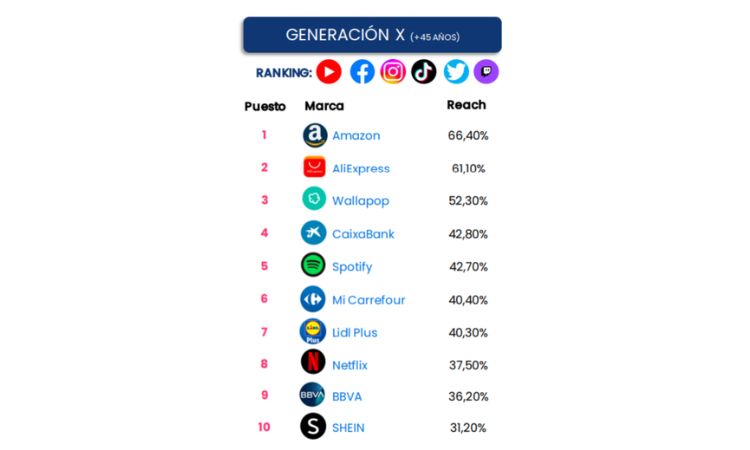 How to encourage your online sales at Christmas by giving payment facilities to your customers, the case of Sabadell Consumer

How to help a neighbor to simulate the presence at home?