Electronic commerce in Spain exceeded 14.6 billion euros during the 3Q of 2021 (CNMC)

2021 witnessed the increase in the turnover of electronic commerce in Spain, since during the third quarter of last year it reached 14,696 million euros, which represents a growth of 14.8% year-on-year, according to the latest data shared by the CNMCData portal.

During the third quarter of 2021, e-commerce revenues in Spain were grouped into travel agencies and tour operators, which hThey have returned to first place by obtaining 6.9% of total turnover. 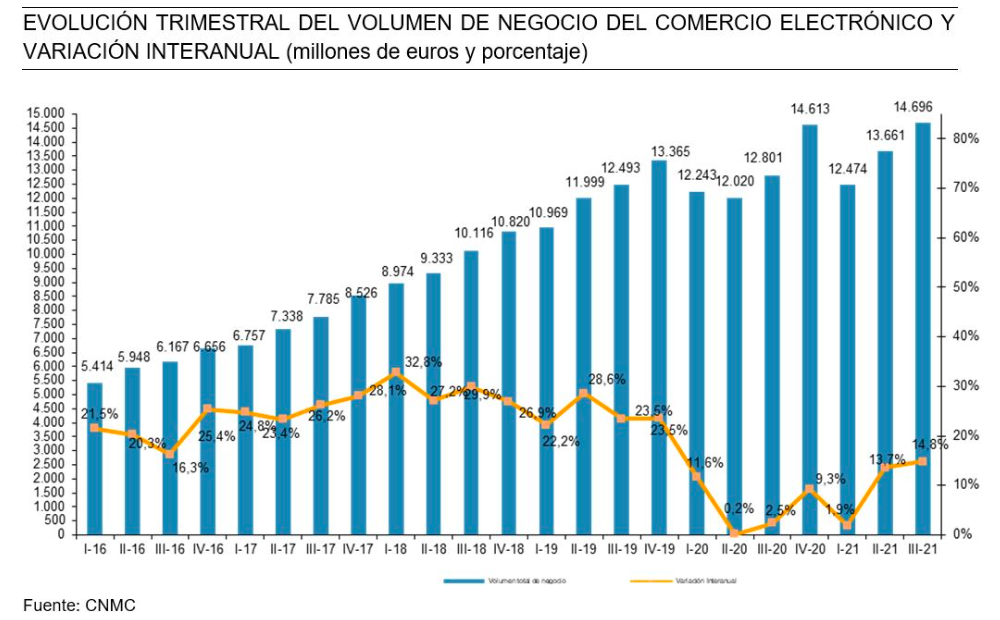 During this period, the sectors of activity with the highest income were travel agencies and tour operators that continue their recovery with 6.9% of total turnover, followed closely by clothing (6.5%) and auxiliary services to financial intermediation in third place (5 ,5%)continuing with the recovery trend of the sectors that have historically captured almost a third of the total amount invoiced by electronic commerce in Spain, except for the period of the pandemic in which supermarkets, grocery stores and streaming services captured the most revenue.

Regarding the number of transactions, the third quarter of 2021 recorded more than 284 million transactions, which represents 10% more compared to the previous year. In this quarter, games of chance and betting were leaders in the ranking by sales (6.9%).

The 44.6% of revenues in the third quarter of 2021 were destined for Spain, while the remaining 55.4% corresponds to purchases originating in Spain made abroad.

The branches of activity with the highest volume of business from Spain abroad areGarments (9.1%), followed by services auxiliary to financial intermediation (9.1%) and hotels and similar accommodation in third place (5.5%). 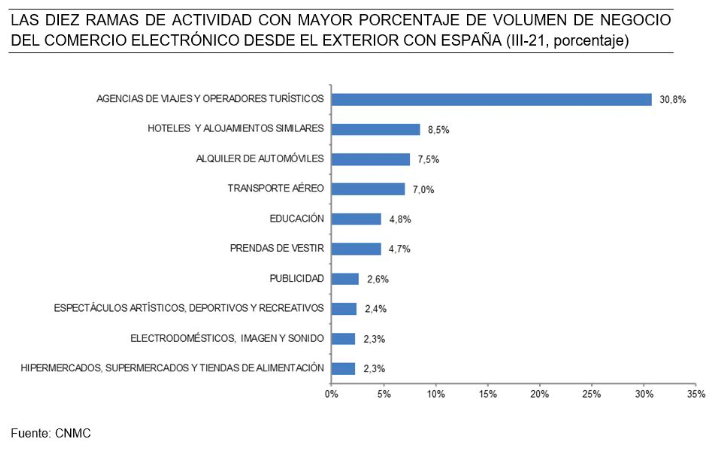 For its part, sales from abroad with Spain have reached a turnover of 1,650 million euros, 5.1% more than in the third quarter of the previous year. 62.0% of purchases from abroad come from the European Union.

Likewise, the areas of activity related to the tourism sector, which includes travel agencies, air transport, land transport, car rental and hotels, managed to capture 55.2% of purchases from abroad with Spain.

Revenue from eCommerce within Spain they increased by 15.6% year-on-year to reach 4,906 million euros. In turnover within Spain, the public administration, taxes and social security (9.3%) are positioned as leaders, followed by travel agencies and tour operators (7%).

What is the importance of the different payment methods in the eCommerce checkout process?

How to encourage your online sales at Christmas by giving payment facilities to your customers, the case of Sabadell Consumer

How to help a neighbor to simulate the presence at home?