Within the e-commerce ecosystem, Black Friday is no longer just the starting signal for the start of Christmas shopping. Over time it has evolved to become the most important event in the e-commerce ecosystem. It is during this season where businesses manage to reach the highest sales peaks. Thanks to which it has become a key date for the development and growth of business.

To better understand how this event developed in Spain in 2021, the Flat 101 agency has launched its most recent study: Black Friday 2021 Study: Consumer trends and digital shopping habits. In which the opinions of more than 300 consumers about Black Friday are evaluated, together with the rates and conversion data of the different sectors of the market.

Who participated in Black Friday and what feelings did they present?

As we have mentioned, the starting point of the study was a survey of the consumer population, with an estimated 300 subjects. This survey was carried out based on 25 questions related to participation in the Black Friday 2021 campaign, purchase motivation, sensations evoked in the campaign and expectations of offers.

In terms of participation, 62.03% of the consumers surveyed stated that they had purchased a product during the duration of this year’s campaign, compared to 37.97% who refrained from participating. Similarly, within the percentage of buyers who took advantage of this season’s offers, 91.84% participated through online purchases. While the remaining 8.16% participated through other channels, such as physical stores. 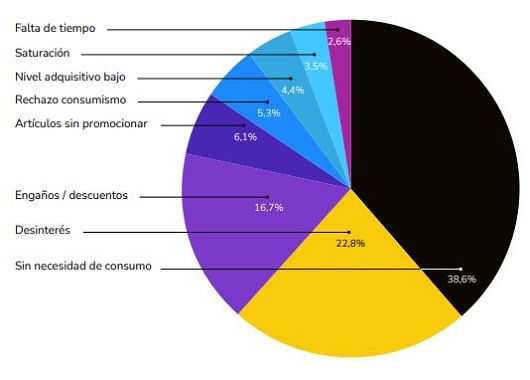 On the other hand, among those who decided not to participate in the Black Friday campaign, a variety of reasons were identified. These reasons range from lack of time with an estimated 2.6% of these respondents, to 38.6% who stated they did not participate due to not having the consumption need for it.

Disappointment was the predominant sentiment during the last Black Friday

According to the survey results, disappointment was the most common feeling among the consumers surveyed (23.9%) when realizing that a business did not have discounts associated with the campaign. Although this is contradictory, since 12.9% of those surveyed affirm that this same lack of associated discounts is a cause for respect in the case of small businesses, since in this way they are not supporting consumer trends and oversaturating the market. 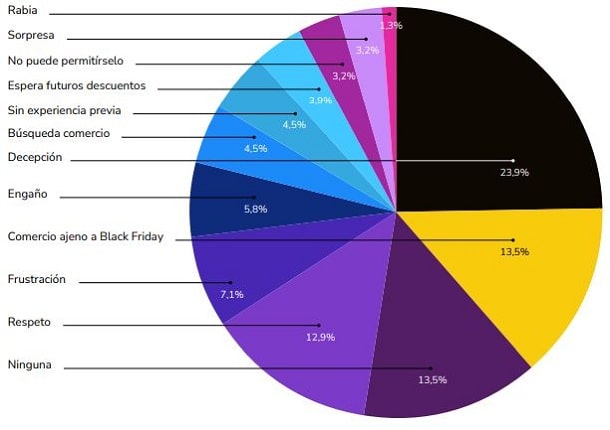 From another point of view, purchases through mobile devices have taken the lead in this year’s event with 64.18%. This denotes the broad impact mobile usage trends have had within the eCommerce ecosystem.

Asked about the devices used, the majority response corresponds to websites with an estimated 66.67%, leaving behind marketplace applications such as Amazon and AliExpress with 43.18%, while own-brand apps they were left with 32.58%.

Planning is a defining trait of Black Friday shopping

Black Friday is a well-known event and a great campaign is made for its significance for business. This same behavior has created a halo of preparation among consumers for this campaign. In other words, buyers have shown a solid tendency (44.6%) to plan purchases for this event.

Interestingly, 44.06% of consumers who plan already have a list of products, but end up reviewing other offers at the time of making the purchase. Meanwhile, an estimated 34.97% affirm that they only buy the previously chosen products. In contrast, 20.98% of buyers do not have advance planning, but are carried away by the products that impress them at the moment.

In the case of discounts, the results show that many of the buyers are not satisfied, since 51.05% of those surveyed expected significant discounts (discounts between 31% and 50%). Many buyers (65.03%) stated that they had only received discounts of between 16% and 30%, which did not meet their expectations.

Most purchased products and returns

The survey carried out by Flat 101 showed that 89.06% of customers bought physical products, while only 18.18% bought digital products. Similarly, in line with the performance of its market in general, the fashion sector (51.52%) and health and beauty (21.21%). they are among the three with the highest output of products, together with that of computer equipment (32.58%). 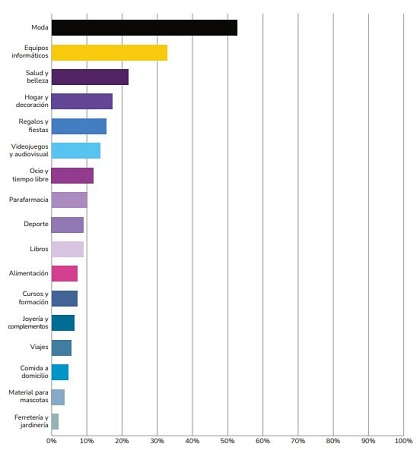 Regarding returns, it was estimated that a 46.85% makes purchases with the constant idea of ​​being able to return what has arrived. Another of the characteristic factors of Black Friday is its proximity to Christmas, which is why almost half of those surveyed (48.85%) they claim to make their gift purchases ahead of time by taking advantage of these discounts.

Moving from the opinion of consumers to this survey, the Flat 1010 agency has also planned an analysis on the conversion of the most relevant sectors of the market, these being: Electronics, Home, Fashion, Parapharmacy and Health and Beauty. Said analysis exposes the conversion percentage of Black Friday compared to that of the entire year, explaining the visible differences in each case.

This sector has been one of the most anticipated by users as a general rule, since in it they can find different accessories and devices for day to day, whose purchase could be facilitated with the advantages of a Black Friday. However, due to the shortage of chips and the rise in the price of raw materials, it is possible to present a decrease in transactions in this market. These are their conversion figures:

As we can see, in this case the increase in computers is broader than in the case of mobile devices. In addition, the average ticket within this sector reached an estimated 269 euros, an increase that adds to the proliferation of purchases by mobile means in this sector.

In the case of the home and decoration sector, this was one of the most enhanced during the time of the pandemic, especially during the months of confinement. This is because people began to explore their own abilities. On the other hand, desktop and mobile devices have achieved an increase in terms of transactions and units sold. On both devices, the conversion during Black Friday is exponentially higher, compared to the rest of the year. In addition to its growth

Finally, it was also found that consumers spent an estimated 51.5% more when shopping via desktop than they did via mobile, purchasing three times as many items with each purchase.

The fashion sector has been positioned as one of the most relevant sectors within electronic commerce for years. However, according to the results, purchases by computer, as well as by mobile, presented worse results in their main metrics.

As can be seen, in the fashion sector much greater growth was considered in purchases made through mobile phones than in the case of desktops. But even so, it is presented with lower figures than the previous year’s campaign.

Within the parapharmacy sector, the most significant increase has been seen in purchases through mobile devices with an estimated 41.6%. While in the case of computer purchases, this figure only reached 14.1%.

In the case of the Health and Beauty sector, its general results were down compared to its performance in the previous campaign. However, its rate of increase is considerably wide, reaching 101.9% for desktop purchases and 219.6% for mobile purchases.

Five tricks to keep your towels clean and fluffy